As we emerge from the so-called ‘Dark Ages’ we begin to get occasional written records to help with our exploration of the paths and tracks in our small community. The Doomsday Book, commissioned by King William I after the Norman conquest in 1066, offers many English places their first recorded snapshot of their land and the stock holdings of their inhabitants, often in quite fine detail. But the Doomsday survey didn’t extend as far north as modern-day Cumbria, so we are denied that first crucial insight.

However through the following few centuries tax, manorial and church records do sometimes survive and it’s possible through them to build up a picture of how the community was changing. The effect on how people traveled through the community and in and out of it would have been significant. New paths and tracks would have been needed and, with a growing population, they must have been more substantial than previously.

The Doomsday survey may not have reached us but the Normans certainly did. Any local rebelliousness was quickly quelled through the establishment of a series of strategically placed castles within the Eden Valley, including one at Brough, the town at the foot of our parish of Stainmore. The protection of the Stainmore Gap, the pass over the Pennines, was clearly still a priority and the road using it from Carlisle towards Barnard Castle, Durham and the south must have remained an important thoroughfare, as it had been from Roman times.

The upland areas of Stainmore parish fell under the manor of Brough (officially Brough-under-Stainmore), although the ecclesiastical centre was Kirkby Stephen. Brough-under-Stainmore had a market charter and an annual fair, with a significant new segment of the town growing along the main road, at some distance from the more traditional community clustered around the church and castle, now known as Church Brough.

While peace reigned Brough and its surrounding lands were able to thrive, but there was the ever-present danger of Scottish incursions from the north. The Eden Valley was an attractive place to raid, right up to the southern point of the vale at which the invaders came up against the natural barrier of the Pennine hills. Regular raids by marauding Scots were to dog the area for centuries, throughout the early medieval period, and in many ways hamper its economic development.

Up in the hills, however, changes appear to have been underway. What may have been used simply as summer pasture when the overall population of the Eden Valley was lower and political control less centralised, now underwent a process of ‘improvement’. The manor, no doubt keen to maximise revenues from the more difficult upland areas of Stainmore, enclosed the land and set up ‘vaccaries’ for the breeding of cattle. Several dozen were established, each with a herd of cattle. The chief product seems to have been meat rather than dairy, perhaps encouraged by the existence of a good route to markets both north and south along the main road. The tracks from Stainmore down to Brough must have been used for the droving of animals, especially when the time to take the calves to market came.

Sheep, interestingly enough, are not much mentioned in any of the written records. It may simply be that their existence was so widespread and commonplace that they were not worth noting. There are records of sheep-stealing crimes being committed, so sheep were certainly around. As today the sheep will have spent much of the year on the higher fells and consumption of sheep and use of the wool may have been purely local, with any taxation on them minimal. 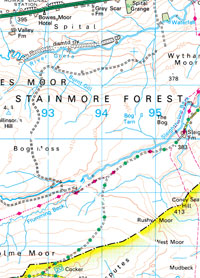 However these sheep had to share that higher ground with other stock, maintained and protected for the purpose of hunting. The new Norman aristocracy were able to get a wide area of upland designated as ‘forest’. Stainmore Forest would have been established by the crown and was likely viewed as an imposition by the local populace, with its appetising deer and wild boar ruthlessly guarded. While it may not have been used by King William himself, who had other forests, including the recently established ‘New Forest’, closer to home, it will have provided entertainment and sustenance for his northern barons.

A hint of the simmering resentment felt by the populace for these Norman imposters can be found in a local legend based in Stainmore Forest. A local tribal leader, named D’Ewebank (the French style of his name makes the story a little more ambiguous), had taken to hunting illegally in the forest. The name Ewebank (sometimes spelled Ewbank) appears in a number of placenames, including High Ewebank which is our own tiny hamlet on South Stainmore. Ewebank is still a common surname in the area.

In the tale D’Ewebank is out hunting with his mates when he clashes with a hunting party of the barons from the Durham side of the border, who no doubt considered they were there ‘by right’. In the foray D’Ewebank manages to capture the daughter of one of the barons and escapes back to his stronghold, said to be somewhere on Stainmore. He holds the girl (who is never named) for several years, during which time he falls in love with her. He desperately tries to persuade her to marry him but she refuses.

After a few years the barons get together a force to come and rescue her. There is a fierce skirmish during which the daughter succeeds in gathering a horse and mounting it. She sets off to safety but D’Ewebank, consumed with jealousy, rides after her and with one swing of his sword cuts her head right off. Now, at dead of night and never at peace, she rides the fells as the ‘headless horsewoman’.

We have to say that, in twenty years of living here, we have never seen her.