The Roman conquest must have brought extraordinary changes in our sleepy backwater of northern Britain. In the first few decades after the Roman invasion in 43AD the region continued to be controlled by a tribe called the Brigantes. However, according Roman chronicler Tacitus, a bitter dispute between the Rome-friendly Queen Cartimandia and her husband Venetius led eventually to her expulsion in 69AD. Immediately Roman legions were sent north to secure the region.

Before long there was an extensive network of roads allowing the Romans to control most of what is now northern England. A major route followed that of today’s M6 motorway through the Lune Valley and north to Carlisle, while another crossed from the entrance to the valley at Low Borrowbridge, where there was a large fort, to Kirkby Thore on the eastern side of the Eden Valley. A second major artery ran along the side of the North Pennines, through Penrith and Kirkby Thore to the summit of Stainmore and beyond. Here there was another large fort, possibly built to house soldiers before the construction of the road during the campaign against the Brigantes but quite possibly occupied on a permanent basis thereafter.

This Roman road lies, for much of the way, under the modern day A66, appearing from time to time near settlements and the remnants of the forts. Numerous fortlets and signal stations are found along the route. One, named Maiden Castle, sits at a vantage point as the road crosses the summit at Stainmore, with magnificent views across the Eden Valley. It is not difficult to see why this was chosen as a suitable place for keeping an eye on everyone below.

Another, Roper Castle, is a signal station positioned high on the moor, not far from a cluster of mobile phone masts at Moudy Mea, today’s high tech signalling technology.

From these stations the site of yet another possible and very famous ‘Roman’ road, one that runs along the long ridge of High Street, is easily visible on the horizon. Whether this was in fact Roman is somewhat open to debate, as there is little or no evidence of typical Roman engineering. If it was indeed from that era, it would have connected Carlisle with Ambleside, taking its unusual and at times bleak and blustery route right across the mountain tops of the eastern Lake District.

The decision by the Emperor Hadrian to build a defensive wall against the Picts will have brought an influx of incomers from every corner of the Roman empire to the area, both during its construction and for the decades it was garrisoned. Hadrian’s Wall, started in 122AD, must have brought an immense amount of disruption for the local population but also opportunities to trade, to learn new ways and to travel. The Romans, after all, were the masters of assimilation and much of the Eden Valley will have become, at least to some extent, Romanised.

And so minor roads crossing between the main Roman arteries would have become increasingly important to the communities living In the Eden Valley. Two potential routes lead south from Upper Eden through long valleys towards the Yorkshire Dales and to Sedbergh, though evidence for both is circumstantial. The route to Sedbergh is dotted with places called ‘Street’, a characteristic Roman feature. In neighbouring Mallerstang, up on the valley sides, there is evidence of ‘hushing’, an age-old mining technique using torrents of damned water to strip away layers of earth in the search for minerals, quite possibly dating from Roman times. 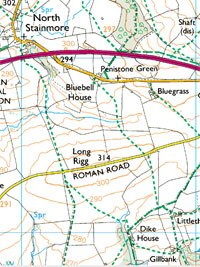 On Stainmore a tantalising stretch of ‘Roman road’ marked on OS maps leads along a ridge away from a Roman signal station by the A66. At first sight this is something of an enigma. One would naturally assume that the main Roman road here lies under the modern A66, keeping to higher ground and passing another Roman signal station on the way. However recent research, done between 2014 and 2017, using a combination of techniques suggests that at least one variant of the main road did in fact divert south along the ridge marked on the OS map and from there drop down towards Brough and its substantial fort.

LIDAR (Light Detecting and Ranging) uses laser beams directed from and reflected back to an aircraft to map very detailed variations in the shape of the ground. It can reveal previously hidden outlines of buildings, field boundaries and, of course, the lines of Roman roads. Along with aerial photography and good old fashioned walking, LIDAR can help bring lost roads to light. And that is exactly what has been done, with a reasonably high degree of confidence, for our Roman road on Stainmore.

According to the research, the road crosses from the A66 to run along the ridge marked as Roman road on the OS map. From here it turns back towards Brough, away from today’s minor road, taking a couple of dramatic hairpin bends down a hill and then, somewhat surprisingly, crossing an area of relatively marshy ground towards the fort at Brough. The LIDAR image of the hairpin bends is particularly impressive, showing up a superb piece of Roman engineering amongst a number of later trackways.

LIDAR has brought impressive results in recent years at major archaeological sites across the world, including the famous ancient city of Angkor in Cambodia and amongst the Mayan temples of Mexico. It is very good at finding hiddent artefacts under dense forest cover. It is pleasing that it is also finding a place in local archaeology, solving the riddles of Roman roads, and much else besides, in tucked away corners of the British countryside.