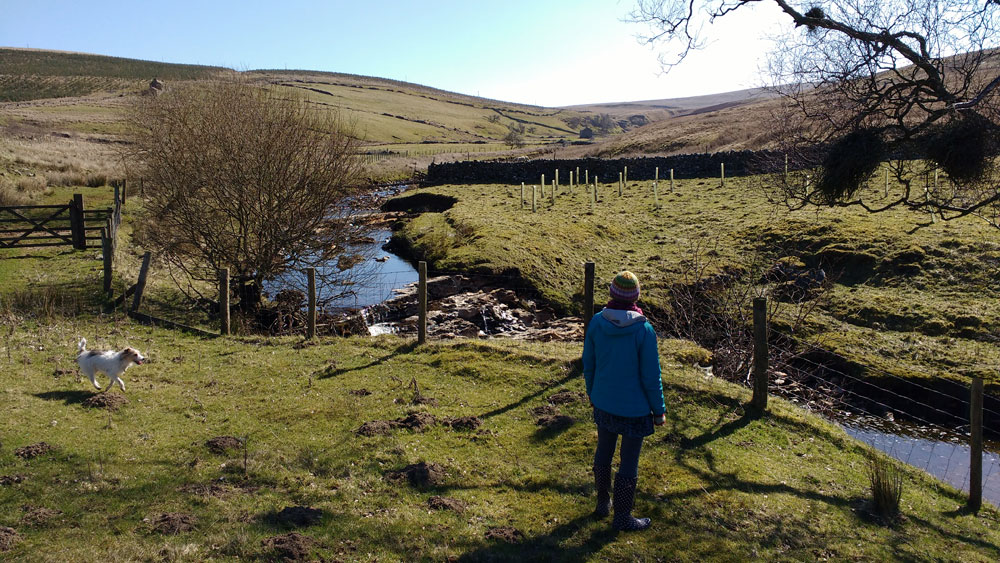 The Romans retreated from Britain at the beginning of the 5th century AD. Their abandonment of Cumbria may not have been exactly overnight – it’s possible that the Roman legions dropped back at first to the natural barrier formed by the Howgill Fells and the Northern Pennines, before finally heading off to deal with troubles at home. Our little valley may, for a short time, have sat at the outer edge of the Roman empire.

The ensuing few centuries have left little in the way of written history. But what have survived are the place names bestowed in this period, and there are plenty of them. Toponymy, the study of place names, can be hugely revealing, especially in rural areas where names stick rather get overlaid as populations, ways of life, and land use shift. In rural life everything moves more slowly, over centuries and indeed millennia. Names therefore persist, although sometimes in mutated forms.

From the 5th century onwards Angles migrated gradually into eastern Cumbria, filtering down north from Hadrian’s Wall and also crossing over the Pennines at Stainmore into the Eden Valley. True to its (more modern) name the Eden Valley proved highly attractive to these new settlers. They prospered and formed themselves into a kingdom. The kingdom of Rheged remained independent until the early 8th century, when it was annexed with the kingdom of Northumbria, and the language used by the local population then transformed into ‘Old English’.

This generation of Cumbrians left their mark on the names of many towns and villages but on remarkably few hills, mountains or other natural features, reflecting perhaps a lack of interest in the upland zones of their home environment. A notable exception is Stainmore itself (literally ‘stony moor’), which suggests that the old Roman road across the Pennines through Stainmore continued to be an important transport and communications route.

Everything changed from around 925AD onwards. ‘Vikings’ – more properly known as the Norse – arrived in the Eden Valley. Ferocious attacks by these ruthless adventurers on the North East coast, as at the abbey on Lindisfarne, have caught the imagination, but our Norse settlers more likely came across the north coast of Scotland to Ireland and the Isle of Man before discovering our fertile valley and deciding to make it their permanent home.

Unlike their predecessors the Norse settlers gave names to upland places and features. Words like ‘fell’, ‘beck’, ‘gill’, ‘force’, ‘pike’ and ‘tarn’ are all Norse. Within a few hundred metres of our house a host of features have names of Norse origin. The river that cuts through the valley is known as the Belah Beck, and upstream, where it is joined by other becks, it goes through Woofergill, near to Intake Force. Across the valley from us is Wrenside, ‘side’ being a Norse word for a farmstead or shieling. ‘Intake’, another Norse word, are the enclosed fields nearest to the fell.

Few choose to live at our elevation (around 370m or 1200 feet above sea level)  today and fewer still would have done so a millennium or more ago. Our remote dale (‘dale’ being another Norse word) almost certainly provided summer pasture and temporary habitation only, with paths to bring stock up from and down to the Eden Valley below, just as you find in mountainous regions across the world. In the summer months it must have been an idyllic and tranquil setting, the fellside criss-crossed with sheep tracks – much as it is today. 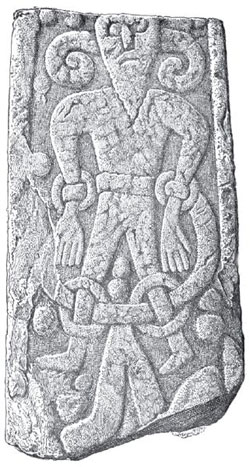 A small remnant of Norse mythology is to be found in Kirkby Stephen church, just a few miles away in the Upper Eden Valley. The Loki Stone depicts the reckless and mischevious Loki, Norse god, giant or sprite, depending on the tale. Loki was a shape-shifting trickster, usually male but sometimes female, and always getting into terrible trouble. In one legend Loki is bound up and it is with manacles on his hands and feet that he is represented on Kirkby Stephen’s Loki Stone. The stone is likely the shaft of a Christian cross, so the binding up of a pagan god at the base of a cross is no doubt an crucial part of the message.

Towards the end of the ‘Viking’ period Stainmore witnessed the bloody assassination of the memorably named Eric Bloodaxe. Eric was King for Norway and twice, for short periods, King of Northumbria (although some argue that these are two different individuals conflated into one). As King of Northumbria Eric reigned from 947-948AD and 952-954AD, being ousted twice by agents of the powerful English King Eadred. On the second occasion it seems he fled, or was being escorted, to the west over the Stainmore pass. Here, according to a history written in the early 13th century derived from a lost northern source…
“King Eric was treacherously killed by Earl Maccus in a certain lonely place which is called Stainmore, with his son Haeric and his brother Ragnald, betrayed by Earl Oswulf; and then afterwards King Eadred ruled in these districts.”

Rumours persist that Eric Bloodaxe is buried somewhere on Stainmore and will one day be found, perhaps with magnficent burial goods. The stump of a stone cross, Rey Cross, standing just off the A66 is sometimes said to have been the marker of his grave, but in truth it is more likely a simple county boundary stone. Wherever his bones lie, Eric Bloodaxe lives on in dozens of Norse sagas and the windswept pass of Stainmore seems a fitting place for his story to end.