Posted on September 19, 2018 by walkingworldapp

For a good century the prime method of transporting people and goods for longer distances were the turnpike roads established in the mid 18th century. There were regular carrying services, run by a number of private enterprises, from Brough and Kirkby Stephen going in all directions on the roads towards Bowes and Barnard Castle in Durham, north towards Carlisle and west towards Kendal, and over Stainmore via Tan Hill to the Yorkshire Dales.

Nothing was to disrupt this pattern of  long distance transport until the railways arrived in Cumbria during the latter part of the 19th century. Elsewhere canals had caused a brief transport revolution, particularly of heavier loads such as coal and delicate goods like pottery. But canals were never suitable in the hilly regions of Cumbria, so the region leapt straight into the railway age, albeit some decades after more industrialised parts of the country.

Local business people and landowners were keen to have their own slice of the railway pie – there was money to be made and a potential boost to local industry to be had – but the terrain and lack of population conspired against the earliest schemes to set up an Eden Valley line. Eventually it was the draw of commerce between the North East coalfields and mines on the west coast that made the construction of a railway line across the Pennines economically feasible.

A new line was planned from Bishop Auckland, where there was a link with the Stockton & Darlington railway, to join with the West Coast Main Line at Tebay. The South Durham and Lancashire Union Railway (or Stainmore Line as it became known) reached the Upper Eden Valley via Barnard Castle and made its way over Stainmore Summit, at nearly 1400ft the highest point of any railway in England. From the pass it dropped gradually towards Kirkby Stephen, the town that was far enough away from the Stainmore summit for the gradient to be manageable, although still steep. Inevitably the town of Brough, which lay much closer to the pass, was bypassed.

The railway took a long gentle arc around Kirkby Stephen on a series of viaducts to reach a station, Kirkby Stephen East, at the southern end of the town, around a mile from the market place. Before long the town stretched out to meet it, a single road with housing on both sides for most of its length.

Local interests and investment did result in a branch line to the Westmorland county town of Appleby, passing through Warcop and Great Musgrave, where a station was built at the behest of the townspeople of Brough. It was still over two miles from the town centre of Brough but by this stage better than nothing.

The main line from Kirkby Stephen continued west to Tebay where a junction was made with other lines going north and further west to the south of the Lake District. Although the primary purpose was for goods the first passenger train ran a day after the official opening ceremony in August 1861. It became a popular tourist route for holidaymakers from the north east heading to Morecambe, Blackpool and other west coast resorts.

Kirkby Stephen, in stark contrast with neighbouring Brough, benefited from a second railway, the stunning Settle-Carlisle line. Because this line had to maintain height to reach through the Mallerstang valley on its way south its Kirkby Stephen station is even further away from the town centre, nearly a mile south of Kirkby Stephen East station. The Settle-Carlisle station still remains in open countryside, linked to the town by road and a public footpath. It is quite a long walk into town. 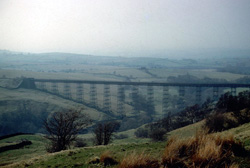 The Stainmore line crossed the Belah beck just below High Ewebank. Despite the income promised from commercial and passenger traffic the line was built on a very tight budget. The design and engineering task was handed to Sir Thomas Bouch, the man unfortunately better known for the collapse of his bridge over the River Tay at Dundee in December 1879. This major disaster, in which the bridge was torn apart by gale force winds as a train was crossing it, led to the loss of around 75 lives. Bouch’s reputation was ruined and he died a year later.

In spite of the mistakes made on the River Tay – and argument still rages over who was fully at fault – Thomas Bouch was an ingenious engineer. At the Belah crossing he kept construction costs down by designing an iron lattice bridge held between two large stone buttresses, similar to those well known (and frequently blown up) in Western films. The bridge was a triumph, but sadly today only the buttresses remain. The line was closed in the early 60s and the bridge was dismantled in 1963. It is a testament to the quality of its construction that it took longer to take down than it took to put up.

Barras had its own station. The station master’s house is surprisingly substantial. Some say it was to allow travellers to stay over for a day or more and soak up the stunning views from this high point over the Eden Valley. If true it seems the plan was misguided, as the vast majority of holidaymakers simply continued on their way. One person apparently inspired by the place was the 19th century painter John Martin. His painting ‘The Plains of Heaven’, one of three huge canvasses in his apocalyptic style telling the tale of the last judgement, is said to have been first conceived on the hills above Barras a decade or two before the arrival of the railway. The link to his painting is tenuous but it makes a good story.

On a more prosaic level, the railway brought a much more efficient mode of transport for the farmers on Stainmore, still evidently engaged in the rearing of cattle. A special platform was built at Barras station so that cattle could be loaded into trucks. This must have opened up significant and lucrative markets for them in the centres of population at either end of the line.

The railway was used for local journeys too. When we bought Tufton Lodge twenty years ago a Mrs Brown was living at High Ewebank Farm, a tiny old lady with a thick Geordie accent who was transported up and down the road by her son Ronnie in his Land Rover. In her younger days Mrs Brown would catch the train from Barras station to Kirkby Stephen to do her shopping. On her way back she took advantage of the train slowing down to cross the Belah viaduct and would carefully drop off her shopping bags by the track on the High Ewebank side. She would pick them up on her way back from the station.

It was not a line without challenges. Winter weather hits hard on Stainmore. Our house and the High Ewebank hamlet are frequently cut off for a week or more at a time through drifting snow on the road. It’s not unusual for the drifts to be over 6ft high, too much to dig out by hand. The railway, in its time, was even more susceptible to snow carried in on the westerly winds and filling up entire cuttings. An evocative film from 1955 in the British Film Institute archive shows the effort that went into reopening the line after a wintry blast.

It is sad now to see the line gone. When it closed cost-cutting was the order of the day and, to save money on wayleaves for drainage and access with local landowners, deals were done to hand back the land on which the line ran. The iron lattice viaducts were taken down with unseemly haste, an act that would be seen now as cultural vandalism. It would be impossible, without vast investment, to reopen the full extent of the line even as a walking and cycle track – as has been done successfully elsewhere.

Immediately around Kirkby Stephen, however, that refurbishment has been done, along with the restoration of the stone viaducts, and the old railway has become a popular ‘promenade’ circling the town. Kirkby Stephen East station is a thriving restoration project for everything to do with the railways, with steam engines running on a relatively short length of track towards Warcop. The viaducts walk, a visit to Kirkby Stephen East and, for some, a trek up to the Belah viaduct and Stainmore summit, makes the Upper Eden Valley an increasingly popular destination for railway enthusiasts.