Posted on October 25, 2018 by walkingworldapp

The railways may not have brought tourists in large numbers to the Upper Eden Valley, but they did help the wealthy indulge in their passions for hunting, shooting and fishing. Since the 19th century large swathes of the North Pennine moorlands have been managed for the breeding of grouse. Shooting continues to be the dominant use of land in much of the northern English uplands to this day, alongside the grazing of sheep.

The land around High Ewebank was part of the Tufton Estate, owned by the Barons Hothfield. The Tufton Baronetcy, of Appleby Castle, was created in 1851 for Richard Tufton. Since that first Baron there have been five more, although as time has gone by the original landholding has dwindled, along with the fine castle seats. Appleby Castle left the family quite early on and in 1956 another residence, Skipton Castle, was also sold. The family seat is now Drybeck Hall, near Appleby.

One of these land sales included High Ewebank and the moorland above it. This was after the death of the impressively named Henry Hastings Sackville Thanet Tufton, 3rd Baron Hothfield, in 1961, presumably to help with the payment of death duties. In this sale was our house, Tufton Lodge, and some of the higher enclosed fields nearby. Tufton Lodge had been built around 1896 as a gamekeeper’s cottage for the estate, to replace an earlier more modest dwelling. The last gamekeeper, Mr Atkinson, lived in the house until the time of its sale, with his wife and – presumably not all at the same time – his twelve children.

The house, although not particularly large, is in a noticeably grander style than the usual Stainmore vernacular, whose buildings tend to sit lower to the ground and have smaller windows that are easier to protect in harsh weather. In style Tufton Lodge looks more like a town house, reflecting no doubt its construction by estate builders more used to working at lower levels. There are properties in Appleby town centre that look very similar, close to the imposing Tufton Arms hotel. 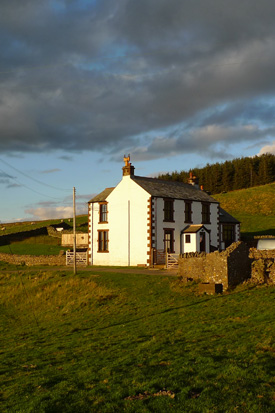 The house is built from two leaves of rough stone infilled with rubble – the existence of a small limestone quarry a hundred metres or so above the house suggests that materials were mostly found nearby. The red sandstone window surrounds will have been brought from near Appleby, where there is an outcrop. The house has, as far as we know, always been painted white and, when the sun shines on it, it can be seen from as far away as the Lake District fells. Its prominence may have been designed to deter would-be poachers. Water came from a well not far from the house (replaced in the 20th century by a spring supply from a mile or more away and then by a borehole, 115 metres deep, which we installed around 15 years ago).

The Barons Hothfield may have sold a lot of their land but, by and large, they retained the shooting rights – a canny move as these have become progressively more valuable. The moorland immediately above Tufton Lodge has been turned into a conifer plantation but there are still shooting rights within the forest. The fellside opposite, above the farmstead of Stowgill, is now owned by a shooting syndicate, who have taken over the rights for the fell and in the plantation.

Shooting estates have always created new paths and tracks to take people to the lines of butts towards which the beaters drive the birds. In the past couple of years we have watched as the estate opposite has created a great loop of hard gravel track, to a shooting hut and beyond nearly to the top of Nine Standards Rigg. Once the season starts processions of black Range Rovers can be seen making their way up the track, shortly followed by the retorts of guns.

In some ways it is apt that we have ended up living in an old gamekeeper’s cottage. My great-grandfather, James Stewart, was a gamekeeper on a large shooting estate in Dunkeld, Scotland, where he was born. James came from a line of tenant farmers; he was conscious of his status in the community and obstinate in a way that some would say has come down through his genes. When his second youngest daughter, Barbara, fell in love with a mere ploughman’s son, he decided the match was beneath her. She was given an ultimatum; give the young man up or he would disown her. She plumped for her lover and my great-grandfather was true to his word. In doing so he split his offspring down the middle, the eldest sons siding with him and his daughters and the youngest two sons with her. My grandfather, William Roy Stewart, fell into the latter camp.

Disgusted with his father William Roy joined a bank in Perth and then emigrated to India. He did quite well for himself and eventually became a manager, though cutting short his education placed a glass ceiling on elevation to the highest ranks in the bank. It’s said that he and another brother, who had emigrated to Canada, supported Barbara and her husband as best they could. It was in India that my grandfather met his future wife, the daughter of a Welsh merchant, who was in Bombay for a visit by the then Queen of England.

As for my great-grandfather, when old age meant that had to give up his tenure as gamekeeper, he was taken in by the daughter he had disowned. She and her husband found room in their house for her aging and presumably contrite parent. The story goes that he was grateful enough to pass to them most of his possessions, an act which apparently sparked off another family feud. For my grandfather the whole episode was so shameful he refused to talk about his upbringing in Scotland at all, although from tales of his time in India he was clearly a good shot and an excellent fly-fisherman, skills no doubt learned as a teenager on the River Tay and in the surrounding hills.

Such stories do seem to come from another time, when the British Empire was a place to go and make your fortune, as many Scotsmen did. But the pastimes of hunting, shooting and fishing continue to be popular with the upper classes, or those who would like to be. There is money in the game. The activities associated with grouse moors, particularly those of ‘predator control’, are highly contentious. Birds other than those being bred to be shot, such as curlews, lapwing and oyster catchers, do thrive in our valley, thanks to the systematic control of predator species, but our raptors are confined to buzzards, kestrels and the occasional red kite and peregrine falcon. We have never seen a hen harrier and they are rare over the border in North Yorkshire too.